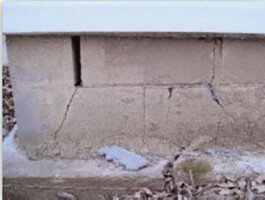 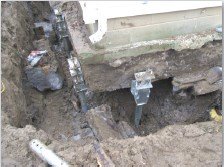 The homeowners called Foundation ResQ because they were having a serious issue with their foundation. Their foundation was dealing with cracks and even settlement. Randy recalled having a friend who was a contractor, and having him look at the issue. His friend temporarily fixed the issue by pouring concrete where the settling occurred, but over time, this proved to be an ineffective decision. The settling began to resurface as time went on and the homeowners knew they would have to bring out a professional contractor. They were heavily concerned because they didn’t want the foundation to get any worse or even collapse. They scheduled an evaluation with Foundation ResQ to find their answer.

Foundation ResQ sent a qualified professional out to do an evaluation on the homeowner’s unstable foundation. Due to the seriousness of the homeowner’s issue, the professional really had to have a meticulous and detailed objective for the evaluation. The objective here was to evaluate the areas of instability and provide the best solution. After a thorough evaluation, it was determined that the homeowners would need piles to stabilize their foundation. It was also suggested that the make-shift stabilization project previously done, be completely removed. The piles would be installed with cylinder lifts to raise the foundation to an even level of alignment. Piles are a strong, solid, and trustworthy method to stabilizing a seriously compromised foundation. After discussing the method with the homeowners, they agreed to proceed with Foundation ResQ. The installation process included digging out the former remnant issues, and installing the piles. The process was successful in completion. The homeowners were given the satisfaction that they need when they called Foundation ResQ.